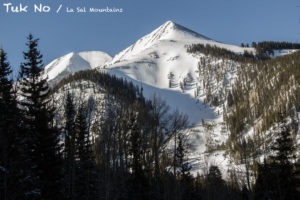 Mt. Tuck No PC: Park City People
At 5 am we awoke to a cool morning in Indian Creek off highway 211 near Moab. Although we had been rock climbing in the scorching heat of the desert for days prior, we scurried our things into the back of Nick's truck and hit the road to do one of our favorite things ever - go skiing. This time, we would get to ski one of Utah's lesser-known backcountry areas and one of southern Utah's tallest peaks. We set off for Mount Tuk No. 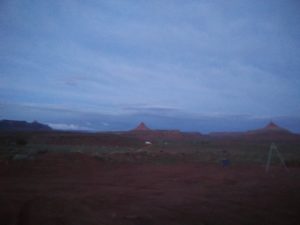 Waking up at 5 am in the desert to go ski PC: Martin Kuprianowicz
The Manti-La Sal National Forest is just outside of Moab by about 30 minutes and has snow covered mountains that you can ski. It's a weird mountain range because its completely surrounded by desert on all sides. I have been dreaming of skiing the La Sal's since I first moved to Utah three years ago. So when I ran into my buddy Nick from my university climbing in the desert, and when he asked me if I wanted to borrow his spare set up and go ski the La Sal's, you know exactly what I said. 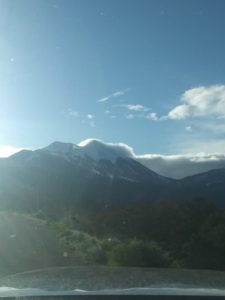 The backside of Mount Tuk No captured on the drive up PC: Martin Kuprianowicz
By 7:30 am we were at the trailhead to begin touring. In the parking lot, we made friends with a skier named Cameron who had been camping near the trailhead and skiing in the area for the past couple of weeks. He knew the area well and was enthusiastic to not only tag along for our tour but lead the way up Tuk No. We began climbing. 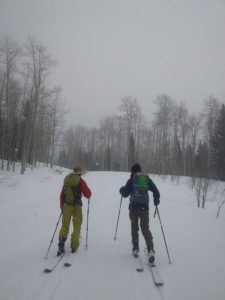 Skiers Nick and Cameron touring in The Manti-La Sal National Forest PC: Martin Kuprianowicz
To our surprise, it had begun snowing about 30 minutes after we had begun our tour! Nor did it let up at all when we were out there. We toured for about 2 hours through the forest, up and over ravines, passing an uninhabited Yurt until we reached the bottom of the peak. From there, we assessed the safest way up the face of the peak and commenced boot packing up it. It was a solid 2 hours of some of the most grueling boot packing I've done all season. 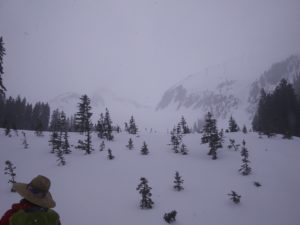 Nick Burr scoping out the ascent up Tuk No PC: Martin Kuprianowicz
"How do you climb a mountain?" were the first words I managed to push out from my burning chest cavity to Cameron and Nick as I gasped for breaths at the top of Tuk No. "How?" They asked. "One damn step at a time," I joked. The hike exhausted us but as soon as we flipped our bindings back to send mode and got on top of the nearly 2,000 vertical foot line we were about to shred down we had all the energy and excitement in the world. By this time, about 3, maybe 4 inches of powder had accumulated and the stoke among us was real. One last check that we were all beeping and down we went.
Skiing a 2,000-foot vertical line down one of southern Utah's tallest peaks with about 3-4 inches of new snow and simultaneously accomplishing a dream of mine was beyond surreal. Who knew the desert gets good snow, let alone on May 10th! The Manti-La Sal's are an incredible mountain range and truly one of Utah's hidden, lesser-known gems among skiers. However, these mountains are infamous for having an incredibly unpredictable snowpack and must be treated with the utmost respect. Nick and I were extremely fortunate to have run into someone as knowledgeable with the terrain at hand as Cameron as his level of skill and comfort out there was very inspiring.
In terms of raw skiing, I definitely recommend going and skiing Tuk No. It's a long, steep, line down a face of a massive peak, with fingers that produce righteous miniature chutes that are excellent for bombing through at terminal velocity given stable snow conditions. Just keep em' pointed straight!
Posted by Martin Kuprianowicz at 8:25 PM