I had a hell of a time abroad last year in Colombia so I thought I'd share some of my journal entries from my time there on this blog, just for shits. Here's the first.

So there I am, sitting in a dark, damp, foot alley on the lower portion of a hill in the backstreets of Barranquilla -- Colombia's foremost port city, when I had some interesting thoughts whilst smoking a joint. As I sat and smoked, I noticed a fruit tree a little ways up in front of me with a bat flying in and around the tree. I watched the bat for a while until losing sight of it before I tuned out to the sounds of the jungle creatures trapped inside the confines of the loud city. Such sounds were those of crickets, birds, bats, rodents, and so forth amid a bustling city in the night. If you closed your eyes you couldn't tell if you were in the jungle or the city. Then It hit me -- all of this was the jungle. Even though I was living in a highly populated urban environment populated with people, cars, trucks, buildings, shopping malls, skyscrapers, and all that -- It was still part of the jungle that made up most of this beautiful continent. I was far from home, I thought, but then I began to ponder about how the whole world is a jungle in itself. However technologically advanced and sophisticated it may be, the world is still the same jungle it has been and will for ever be. So then maybe, in this modern-day jungle in which we live, if you look hard enough, you will find that we are still just another species competing for survival like any other,  all at the will of nature.
Then I just listened. The bat's wings fluttered. The insect kingdom wailed. You could hear the distant sounds of people and music in the long silences between cars passing on the nearby street. These vaguely human sounds almost seemed reminiscent of an ancient jungle clan in the distance, with their drums bellowing and indistinct chatter amongst their members. And there, for a moment, in the calm, night air of the dank side alley in this coastal city, it almost seemed as though past, present, and future were all blended into one and the jungle softly welcomed me. 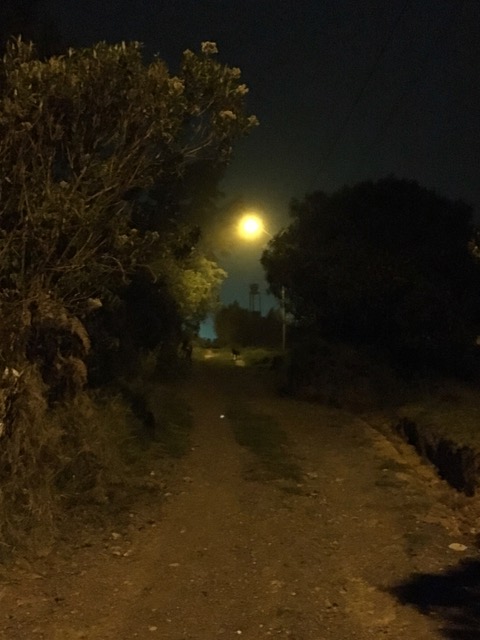 A back alley somewhere in Colombia

Posted by Martin Kuprianowicz at 7:53 PM