The scariest thing about the Jake Gyllenhaal film, “Nightcrawler,” is Jake Gyllenhaal. His sunken in eyes, skeleton pale skin, and obsessive demeanor tie together in an unnerving cocktail that is the gritty nocturnal thriller, “Nightcrawler.”  Jake Gyllenhaal stars as the perfect creep, an extremely high functioning petty thief with apparent sociopathic tendencies named Lou Bloom, the film’s leading role. Lou doesn’t really get people nor like them, but he knows how to use them, leverage them, and creep them the hell out.
Written and directed by Dan Gilroy, “Nightcrawler” is a drama, mystery, and suspense thriller set in the nocturnal underbelly of Los Angeles about a freelance videographer who records violent events late at night and sells the footage to a local television news station. The film scored an overall rating of ninety-five percent on Rotten Tomatoes and casts Gyllenhaal along with Rene Russo who stars as ‘Nina,’ and Bill Paxton as ‘Joe,’ Bloom’s competition. The movie starts with Gyllenhaal lurking around in the darkness of industrial Los Angeles looting for scrap metal. The film only gets grittier and more disconcerting from there and viewer discretion is advised, just like the gruesome recordings of car crash and homicide victims that Bloom sells to news director, ‘Nina,’ at KW2 News. The relationship they have is somewhat grotesque and the date they go on about halfway through the movie has you either cringing or feeling a mix of sorry and scared for Nina, Bloom’s collegue and crush who is blackmailed into sleeping with him. At one point in the movie we see the two having a heated, almost romantic moment after Lou shows Nina his most disturbing and bloody video footage yet. As a viewer, the scene pisses you off or confuses you but also adds to the overall strangeness and power of the film. The film has a sense of Film Noir and the progressive evolution of the debauchery of Lou Bloom escalates rapidly, starting from looting scrap metal yards and progressing towards moving around dead bodies at accident scenes for better camera angles before the cops arrive. Gyllenhaal’s performance is as powerful as the overall creepiness he exerts into the film that would be characterized as somewhere in the middle between intoxicating and fearsome. You just don’t know when this guy Lou is going to snap or what he’s going to do next but man, does he make it interesting to watch.


Film Noir fans or those looking to watch something on the darker side of film will enjoy watching the nail-biting performance that Gyllenhaal delivers and the feeling of uneasiness that comes along with it. “Nightcrawler” is an excellent choice for thrill seekers, suspense lovers, and even action fans as it involves car chases and gun fights. It is bloody and leaves you with no idea what will happen next and I liked it, especially for Gyllenhaal’s performance which left me equally captivated and disgusted. The film’s soundtrack does leave room for improvement as much of the music is redundant and not exactly common tracks you would hear in a suspense film, often sounding upbeat or energetic. Yet aside from the lacking sound track and the relationship between Lou and Nina that confuses many and heightens the anxiety levels of most, “Nightcrawler” will not disappoint the viewer as a thrill-seeking, suspenseful movie about an enticingly creepy man and his new found, obsessive line of work in the underworld of nocturnal Los Angeles. 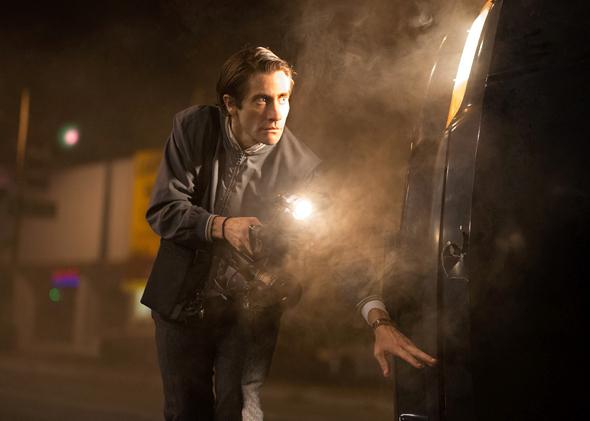 Gyllenhaal as Lou Bloom in "Nightcrawler"
Posted by Martin Kuprianowicz at 10:44 PM