To understand the hilarity of this tale properly, one must take into consideration the backstory of the day before, that lead up to Peter's birthday party at the Bogota Beer Company.

It was a Sunday, but a Sunday unlike any other in Colombia. On this Sunday the citizens of the sovereign state of Colombia took a vote for anti-corruption measures for their government. Normally this would be a very good day to be proud of Colombia, except for that all alcohol sales were prohibited on this day. This was bad news because we were trying to celebrate Peter's birthday. So, for Markus, Peter, Julia, Laura, and I -- all of us who were hanging out at Peter's apartment in Miramar (a neighborhood in northern Barranquilla with a view of the ocean), these silly "Anti-Corruption Day" rules did not apply to us, nor did they apply to the humble tienda owner up the street who sold us beer.

SO we got the beer and went to an empty, terraced plot of land above Peter's apartments with a nice view of downtown Barranquilla and proceeded to start smoking joints and drinking beers -- a typical Sunday evening in Barranquilla amongst us international students. As night fell and our buzz grew stronger, Julia suddenly got a bad feeling as to where we were and what we were doing -- and what day we were doing it on -- and suggested that we get up and leave and go back to Peter's apartment, where it was "safe." So, being reasonable individuals, we all agreed with her and decided that we would leave once we had all finished the current beers that were in our hands. Not more than sixty seconds had passed since our declaration to leave before two of Barranquilla's finest police officers rolled up to where we were hanging out on their neon green police motorcycle (singular). We tried to hide the evidence but had nowhere to hide it and nowhere to run. We were fucked.

The cops wanted to speak to the best Spanish speaker out of the bunch so we offered Laura as tribute. But the cops didn't want to talk to a female, so guess who was next in line to handle the situation. Fear set in at this point as I approached the cops, high as fuck and carrying an ounce of bud in my pocket. They calmly explained that because of what we were doing and where we were doing it (open containers in Barranquilla's public areas are strictly forbidden), we would have to pay a fine or be given a "multa," or ticket. In other words, these guys wanted a bribe. What would pursue next would be a very calm, coordinated, and business-as-usual type engagement between myself and the police as to how big their bribe was going to be.

The cops started at 400 U.S. dollars.  I countered with 50.000 pesos (an equivalent of 16 U.S. dollars, the exchange rate at the time was about 3,200 pesos to one USD). Next, they asked for 400.000 pesos so I countered with 70.000 pesos. This went back and forth for about 10 minutes until we reached an agreement at the fair price of 130.000 pesos or about 40 dollars, which, split 5 ways wasn't terrible. The whole ordeal was like "Deal or No Deal," Colombian cop version. I found it interesting though because the entire time the cops kept emotion out of it apart from the occasional smile or laugh because of my high Spanish or my gringo bartering tactics. After it became apparent that they were just trying to score a few bucks I lost all sense that we were going to get in trouble. The average Colombian police officer only makes about 200 USD a month so they will take all they can get.

By the end of the ordeal, I was not happy, but I shook their hands anyway like I would with any business deal. I was just glad I avoided getting a Colombian misdemeanor and my friends were kind of impressed with how I handled the whole situation.

So then the next day all of us were going to meet up at the BBC (Bogota Beer Company -- a bar) and celebrate Peter's 29th birthday. All of us in a group text for Peter's birthday (about 20 of us), decided that we would buy Peter an authentic Junior jersey -- Barranquilla's premier soccer team -- because Peter was a big soccer guy. With messages going back and forth about the event that night, an idea struck my mind -- how funny would it be to prank this fucking guy on his birthday and maybe scare the shit out of him?

So I explained to everyone in the group chat how funny I thought it would be if we paid off a cop to come up to Peter at the bar in an intimidating way, looking like he was about to bust his ass or something, but then give him his birthday gift and wish him a happy birthday from the lot of us. A little birthday prank. Which is exactly what we had an armed security guard in a military-type uniform do.

We arrived at the bar, had a few drinks and enjoyed the marijuana-infused birthday cake that Jenny and Marta had brought for the event. We then waited until Peter was outside of the bar smoking a cig when we would nonchalantly gather around him with our phones ready to capture the comedy. I signaled for the guard to come over, who was already on board and had Peter's birthday present with him. It all worked flawlessly.

The security guard approached Peter, who was looking the other way, and, with the advantage of surprise, said to him in firm Spanish: "Are you Peter so-and-so?" The look on Peter's face was priceless. Wide-eyed and suddenly pale, Peter pushed out a nervous "sí."

"Well, the police department of Barranquilla has something for you," said the security guard.

Peter's heart appeared to have stopped for a moment. Then after a long pause, the security guard smiled and handed Peter his jersey. "Happy Birthday!!" we all screamed. Then we all burst out laughing, as well as Peter who roared, red-faced and all, "You motherfuckers got me! Oh man, thank you, guys. This has been the best birthday ever," he said.  Peter always enjoyed a good laugh. 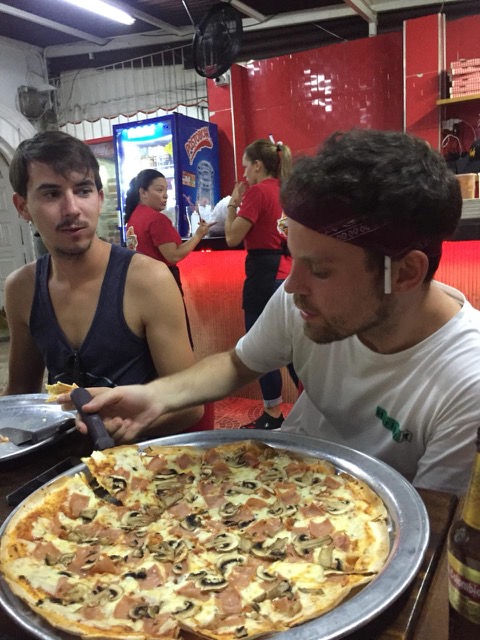 Peter pictured on the right

Posted by Martin Kuprianowicz at 9:07 PM