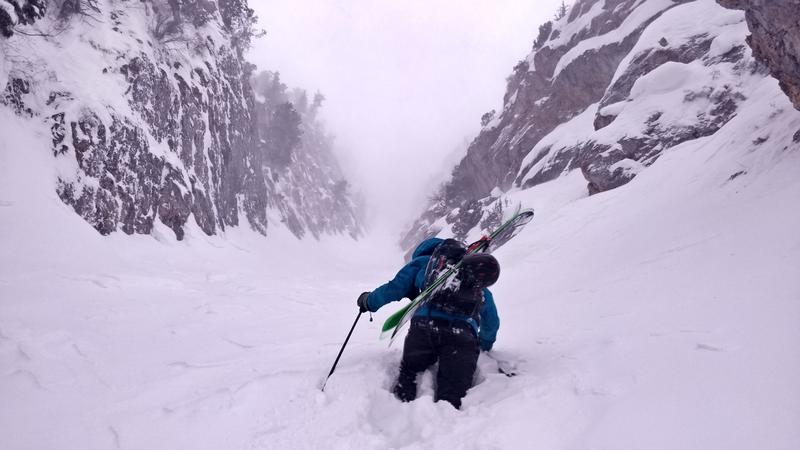 An avalanche in Mount Olympus' Memorial #5 Couloir nearly claimed the lives of two skiers today. Photo: UAC 02/06/20
Author of the "Chuting Gallery," Andrew Mclean, describes Mount Olympus' Memorial Couloirs as "hard to see, hard to get to and hard to find, but quality skiing nonetheless." The Memorial Couloirs are a series of easting-facing chutes with about a 45° pitch that flank the Mount Olympus Couloir which is tucked behind the far left-hand (north) shoulder of Mount Olympus if you are looking up directly from the Salt Lake City valley floor. The couloirs are roughly 1,200 vertical feet, appearing steep and desperate from a distance, but are worth skiing in the right conditions.
Today, however, was not the day to ski them, as you will learn from the harrowing accounts of the two skiers who survived two separate avalanches that nearly ended them on Memorial Couloir #5 this very morning. An avalanche warning was issued by the UAC earlier today detailing the high avalanche danger for the Salt Lake Area Mountains. Below is the warning and the reports of those two skiers, provided by the Utah Avalanche Center: 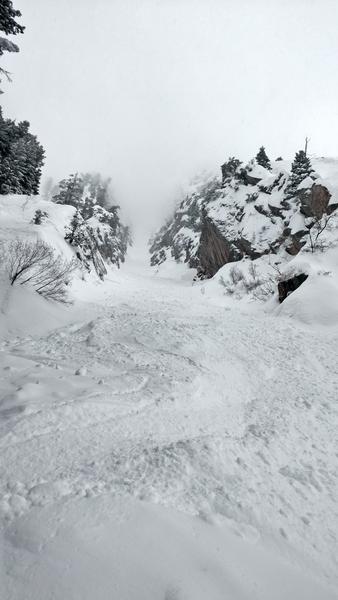 The aftermath at the bottom of Memorial Couloir #5 where the booter begins. Photo: UAC 02/06/20

Close call early this morning. The plan was to get out early and ski Memorial #5 before the heavier snow and winds made the danger higher. On the lower skin up we saw some cracking in the new snow at the new-old snow interface, and were not overly concerned as the cracking was only about 1-2” deep (see pic). We skinned over and into the chute at about 7400’. We saw that there had been a few tracks in M5 from the prior days and that the snow in the chute had settled with skier compaction and had about 2-4” of new on top, with a very little bit of wind buffing. We transitioned to booting in Billy Goats and began to make our way up M5. The snow in the chute was soft and not condensed into any form of slab. We could see that near the top the winds were stronger and there was snow transport occurring up there. We discussed safety again and felt that the danger would be slough management on the way down and kept moving upward. We hugged the lookers right wall on the ascent. At about 8000’, my partner yelled “Look out! Move!” and I looked up to see a small cloud of snow coming at us. I moved quickly to the right to hug the right wall, expecting it to be a small slough released by the winds and push past us. What I did not expect was that because my skis were on my pack and they were the most exposed, the slide hit my skis with enough force to knock me over, pointing me face down facing downhill. I was able to right myself with a tumble and thought it was over, only to look up for my partner and see a much bigger and faster moving slide coming at me. I was hit and knocked over, tumbled a bit (all with skis still on pack) and was dragged downhill in an upright position with my head uphill but at the level of the moving snow. My skis on pack were pulling me under as it moved and I was pulled below the moving snow for a couple of seconds before I popped up and was able to see clearly. I was still on the far side of the chute and saw my partner being tumbled down in moving snow in the center of the chute. I kept eyes on him until he stopped tumbling and got upright out of the snow. I lost my hat and both poles in the tumble but was able to retrieve them after things stopped moving. I could see the slide still moving around the left hand bend at about 7200’. I estimate I was pulled downhill approximately 3-400’ vertical. I have skied a lot of technical terrain with my partner, but neither of us have skied M5 before. I believe the slide was caused by snow coming off one of the walls near the top of the chute and entrained snow in the steeper parts as it moved down. I was wearing an airbag pack, but did not have the trigger out (mistake), though I’m not sure if would have done much good opening against skis on pack when the skis on the pack were what was pulling me under. We had followed safe protocol throughout, and I believe our mistake today was unknown objective hazards. Because we had not skied this before, and because we could not clearly see the final upper reaches, we could not know how much snow was on the upper rock walls and/or what danger they may have posed. Being a very early start, the UAC dawn patrol forecast was not on the phone lines when I started driving so we did not have that added resource for wind/snow transport knowledge. Being in a tight chute that runs for a lot of vertical provides no escape from something like this where the danger was not the conditions in the chute itself, but what may happen from the surrounding landscape.

I won’t go over the conditions to much as my partner already went over them, but I will go over my account of the event as well as a few red flags I noticed but didn’t factor into the actual hazard of the location. As stated above I was leading the bootpack in billygoats on the lookers right of memorial #5 roughly 400’ up from the start of the bootpack. I looked up from my booting to see a powder cloud moving toward us at high speed, yelled “MOVE MOVE MOVE”, and had time to run 3-4 steps to grab onto the wall. The slide also caught my skis on my pack and pulled me off the wall after roughly 2-3 seconds of the initial impact and more into the center of the chute than my partner. As I was coming to a stop, my head was buried but could tell that my arms were above the snow surface and that I wasn’t very deep. I was then hit by a secondary avalanche and pushed back under. I was able to swim to the top where I caught a glimpse of my partner on top and hear him say “I SEE YOU” before tomahawking once or twice and swimming back on top and coming to a stop. My skis were ripped off my pack during the tomahawks but were right next to me when I stopped. My estimation is that I was carried almost 500’ from start to finish.
As stated we were discussing the unstable top layer most of the way up and intended to put in some good ski cuts and ski behind our sluff on the way down. When we were booting up the chute, a small sluff released off a 10’x10’ little hanging snow patch on the right rock wall and sent more cracks shooting out in the shallow top layer in the chute. This should have been a huge red flag that if there is a bigger hanging snowfield up high it could release off the rock wall and let all the sluff in the whole chute loose at once (which is what we believe happened). 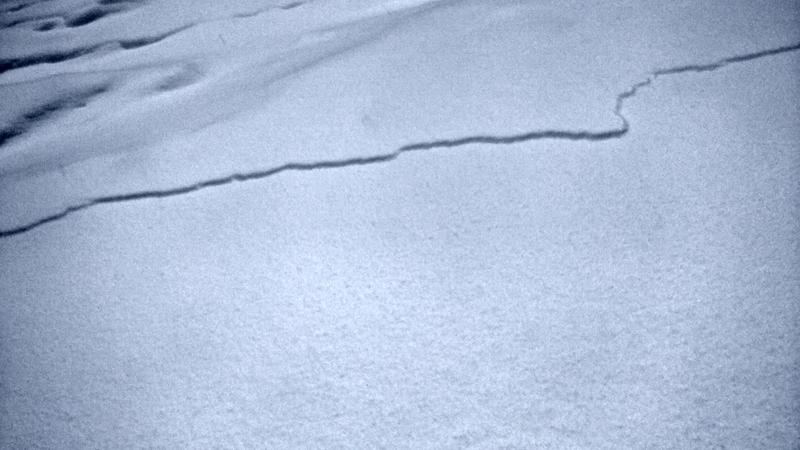 Cracking in new snow at ~6600'. Photo: UAC 02/06/20
It should be noted that the avalanche danger for the Salt Lake Area Mountains today was HIGH at upper elevations which have been exposed to the most snow and the most wind, CONSIDERABLE at mid-elevations where soft slab avalanches were easy to trigger, and MODERATE at low elevations.  On top of this, Highway 210, which leads to world-class ski areas Alta Ski Area and Snowbird, did not open today. Both Alta and Snowbird were placed on interlodge restrictions due to high avalanche danger. 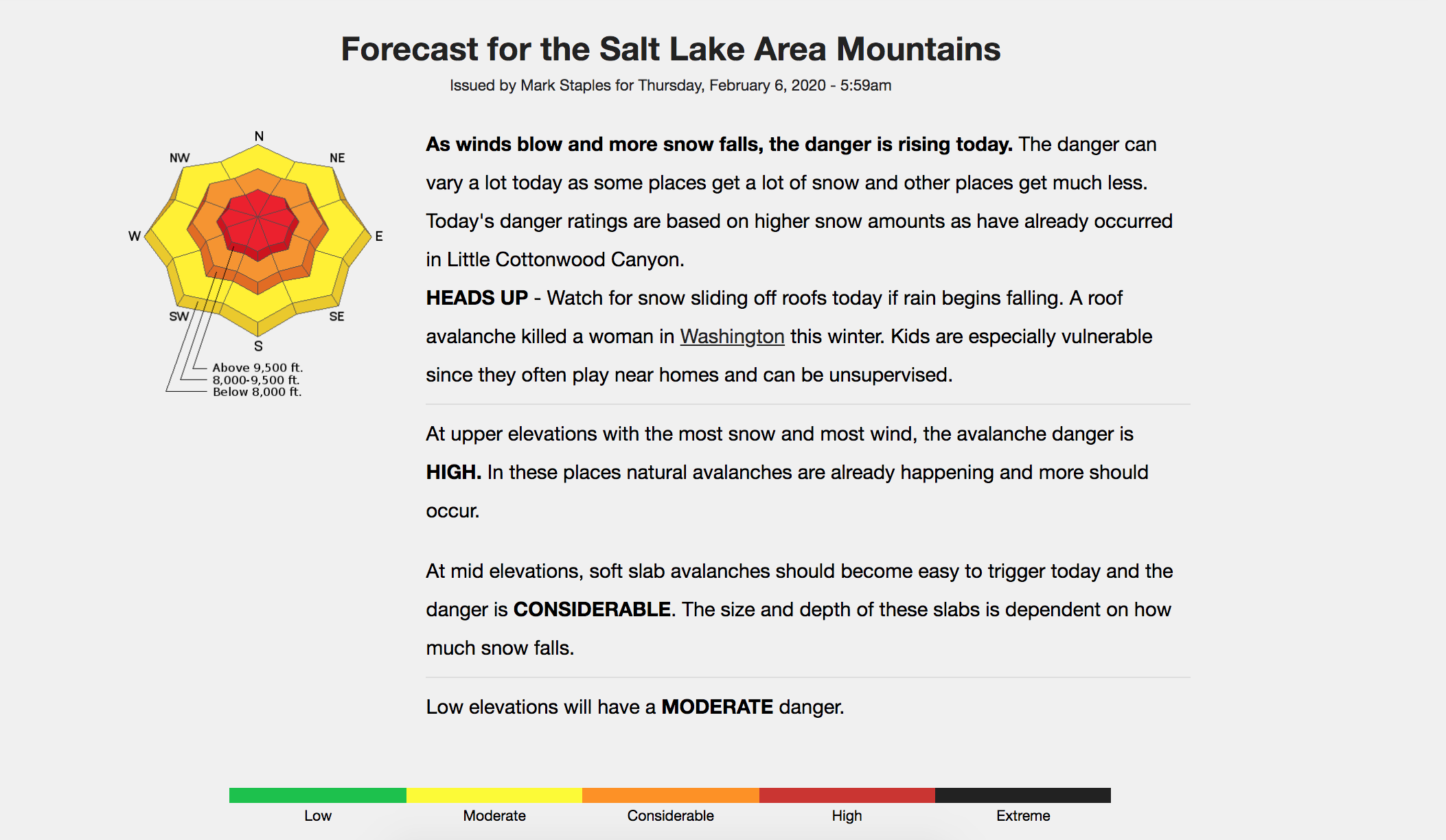